Susanna is a travel nanny. She specializes in traveling overseas with her clients and looking after their young charges in unfamiliar surroundings–including Japan. She read my book and emailed to ask if I wanted to meet up before we left. Did I ever.

She loaned me some books and gave me helpful advice about Japanese toilets. When it came to breakfast, however…

“Breakfast is going to be tricky,” said Susanna.

Everything I know about Japanese breakfast is a stereotype: dried fish (himono), rice, miso soup, and natto. Maybe some grated nagaimo, which is a type of tuber that turns sticky and runny when grated. In A Cook’s Tour, Anthony Bourdain describes this type of meal in excruciating detail, comparing the nagaimo to all sorts of secretions.

Anyway, breakfast turned out not to be tricky, and I didn’t get any natto or himono, not that I would have minded. Our hotel had a choice of Western or Japanese breakfast. Iris got the Western, which featured a sausage link, potatoes, salad, scrambled eggs, and a sweet roll. “That was a good sausage,” she said. “I think it was a fake meat sausage, like for vegetarians.” I’m sure this was not the case, but I couldn’t convince her otherwise. She also got a bowl of strawberries, which she doused with cream and sugar and congratulated herself for inventing a new taste sensation.

Meanwhile, my breakfast was awesome! Rice, nori, two kinds of pickles, miso soup, sauteed fresh fish, and soybeans. I could eat this for breakfast every day, and for the rest of the week, I did. I think it was $13. If you got this at an American hotel it would be $30. Oh, and there was tea.

There is tea everywhere. Tokyo is a freely flowing tea fountain. There was tea on the plane. It wasn’t very good, but it was certainly better than any tea I’ve had on a plane before. But everywhere we went, there was wonderful bancha or sencha, usually complimentary, with the right amount of leaf dust at the bottom of the cup. I felt exactly like a coffee lover from nowheresville USA vacationing in Seattle: you mean I get to drink this stuff everywhere, all day?

The hotel breakfast kept getting better. Every day, a different fish, different vegetables. There were always both pickled and cooked vegetables, which made me extremely happy and gave new meaning to the phrase “part of this complete breakfast.” Simple boiled potatoes one day, a complex vegetable stew another. One day I got a fried egg. But on our last morning, just to be different, I took Iris to Denny’s. 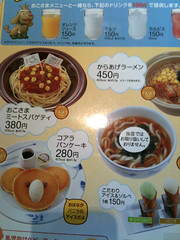 There are no Grand Slams on the menu at Denny’s in Japan. In fact, it’s mostly Japanese food and Japanese-style western food. There’s no English menu. Iris zoomed right in on that koala pancake. The nose, which assumed would be butter, is ice cream. The eyes are Cocoa Puffs. Can you even imagine a more absurdly kid-pleasing breakfast than this? (I had French toast, and we ordered two sausage links, because, at that moment, I remembered the word for “two” but not the words for “three” or “four.”)

I have a bunch of Japan-related posts in the works, and here’s the link to all our photos: