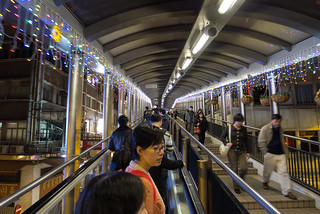 Few people drive to work in Hong Kong. Owning a car is absurdly expensive and generally restricted to the rich, though the rich are not in short supply here. One day I took the bus to Shek O beach along a stomach-churning mountain road in the southeast corner of Hong Kong Island. At one point, the road was narrowed to one lane by a rockslide, and flaggers controlled the flow of traffic. As the bus passed through, I saw at the head of the line, waiting to travel back into town, a shiny black Rolls-Royce.

Most people, however, get to work (or the beach) by subway, ferry, bus, tram, or…escalator.

The Mid-Levels Escalator is the world’s longest escalator complex. It runs up the slope of Victoria Peak through the Soho and Mid-Levels neighborhoods for about half a mile, cutting a perpendicular swath along dozens of small streets, each sporting shops, indoor and outdoor restaurants, butchers and vegetable sellers. The escalator runs downhill in the morning for commuters coming down the mountain and uphill the rest of the day because the Peak is really, really steep.

The escalator is one story above the street, and at every intersection you can hop off and walk down to street level or, usually, into the second floor of a building. Just when I was getting thirsty, the escalator opened directly into the second floor of a Wellcome supermarket, where I bought a bottle of green tea and browsed the fresh noodle section. Although it’s lit up at night and serves some of HK’s wealthiest neighborhoods, the escalator is anything but deluxe: it’s well worn (55,000 people ride it daily) and feels like a reliable old Honda Civic.

As a people mover, the escalator works like a streetcar: not built for long distance travel but for extending your walk beyond the point where you’d usually poop out. Sure enough, I rode the entire length of the escalator (and kept meeting up with it, sometimes unexpectedly, whenever I was on HK side). I popped into a bookstore, bought a notebook, and admired the selection of chop seals, used throughout much of east Asia as an adjunct to handwritten and electronic signatures. I thought about commissioning a chop seal with the Chinese characters for “soup dumplings,” which would probably be a mildly imperialistic thing to do, but if you’re going to reduce a whole culture to three symbols, I can’t think of three more auspicious ones.