A couple of weeks ago, as kids often do, Iris pulled a surprise. It all started with 1/4 teaspoon of cayenne pepper.

Laurie made classic American tacos for dinner, the kind you may have heard about on a recent Spilled Milk episode, and she made homemade taco meat from the Cook’s Illustrated recipe. That recipe includes a bit of cayenne pepper, which I usually leave out so as not to singe the tender palate of my wimpy child. You’d think after 16 years of marriage Laurie would have developed the ability to telepathically intuit my recipe modifications, but this is not the case, so she included the cayenne.

“Hey, these are spicy,” complained Iris. “Why did you make them spicy?” Then she ate four tacos. It was a shot-for-shot remake of the time she ate two spicy enchiladas before she turned one.

Since the taco incident, Iris has requested spicy tacos as her pick of the week. She goes around saying, “I love spicy food.” See, it’s true what they say: if you repeatedly serve a kid a food you want them to try, eventually they’ll dig in. It only takes seven years.

Anyway, Iris’s timing is good, because I’m in love with Fuchsia Dunlop’s new cookbook, Every Grain of Rice. Unlike Dunlop’s two previous Chinese cookbooks, which focused on Sichuanese and Hunanese cuisine, this one is an eclectic collection of recipes. But it’s the most inspiring recipe collection I’ve ever seen between two covers. I’ve cooked over a dozen recipes from it so far; nearly all are winners, and nearly all contain either hot oil or Sichuanese hot bean paste (doubanjiang).

I hate being told what to do, too, but hot oil is one of those ingredients that you simply have to make yourself; the commercial stuff is lousy. Luckily, making it is easy, because hot oil is simply any kind of neutral oil infused with spicy dried red chiles. You can use crushed red pepper like you’d find at a pizza joint. You can crush any kind of dried red pepper you find at an Asian supermarket, or use Mexican chile de arbol. Dunlop, however, recommends Korean chile powder (gochugaru), and I happened to have a sack in my freezer. I heated soybean oil with the chile powder and a bit of crushed ginger and sesame seeds, and a few minutes later I had an intensely red, fiery oil to use in recipes or just drizzle on noodles. It’s good in the fridge for several weeks, but I used it up long before that, and now I need to make more.

In the US, the fava bean will likely never shake off its association with Hannibal Lecter. Every spring, I bring home the leathery pods from the farmers market and enlist my family for help in the endless process of preparing them: peel off the outer pods, blanch the beans, slip off the inner jackets, then saute in olive oil. What looked like a generous pound of beans turns out to be a stingy pile of green ingots, but the flavor is worth it. This happens once each spring, and then I forget about favas until the following year.

Aside from cannibalism, then, fava beans are a symbol of the Alice Waters style of local, organic, European-inspired, don’t-mess-with-the-ingredients cooking. In Sichuanese cuisine, however, favas are eaten daily in the form of doubanjiang, and someone else has done all the hard work for you.

Most versions, including the bestselling Lee Kum Kee (which is available in many Western supermarkets), are made with soybeans, and they’re good, but the fava bean version is better: more complex, more of a fermented character. To find the real stuff, I went to Viet Wah, a Vietnamese grocery in Seattle’s International District, where I faced off against no less than three dozen different chile pastes. Eventually I found exactly one that was made in China and contained fava beans (billed on the label as broad beans). Here’s the one I bought: 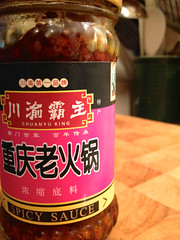 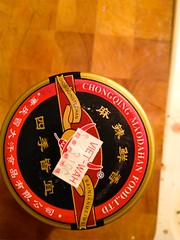 I asked about it online, and it turns out (thanks to @dianalesaux on Twitter) that this is Sichuan hot pot base. It has added ginger and garlic, which plain doubanjiang doesn’t.

No matter. It’s terrific stuff, and I used it last night to make one of my all-time favorite recipes, Dry-Fried Chicken, from Dunlop’s earlier book Land of Plenty. It’s a recipe I’ve made in the past for me and Laurie when Iris is out clubbing, or whatever eight-year-olds do out on the town. Last night, however, Laurie was out and I found a couple of chicken thighs in the freezer, so I made this recipe, which consists of cubes of chicken cooked far longer than necessary in peanut oil and doubanjiang until the hot bean paste becomes a crust on the chicken and the meat itself takes on a pleasantly chewy texture. As the dish finished sizzling on the stove, I tasted a chicken chunk and said, “Whew! This is spicy.”

Iris looked unnerved, but she ate a ton of chicken, drank two glasses of water, and said, “Dada, you have got to make this again.”

So I’m going to need more doubanjiang. My friend Marc Schermerhorn just got back from a cooking class in Chengdu, Sichuan, and I asked him what kind to get. We found a sketchy-looking website selling all sorts of chile pastes and split and order of two kilos of what Marc believes is the stuff he used in Sichuan. Yes, two kilos. Marc is skeptical of my ability (not to mention his own) to use up a kilo of chile paste, but I have a pint-sized secret weapon.

One thought on “Hot spot”