A couple weeks ago I reordered from Anson Mills. Whenever I order from Anson, I always say I’m just going to get the grits, but they have so many other alluring products. This time I threw in a bag of Carolina Gold rice and a bag of farro.

Farro is the Italian word for emmer wheat, which is, well, a kind of wheat. You can cook it like a risotto (farrotto, this is called) or make a salad, or put it in a stew. I’d been reading Lorna Sass’s book Whole Grains: Every Day, Every Way, and there’s a recipe in it for farro, asparagus, and prosciutto salad that looked delicious.

The grains arrived, and I went to the Anson Mills web site for advice on cooking the farro. Here’s their recipe. I like that it called for “a fine, footed colander,” which is fun to say in a fake Irish accent.

The first step of the recipe is:

Turn the farro into a large bowl and cover it with 2 cups of boiling water. Skim off chaff and hulls with a tea strainer. Soak the farro overnight.

I did as suggested. A few hulls floated to the surface, but a lot of them seemed to be holding tight to the grains.

The next day, I drained the farro and simmered it in salted water for about half an hour. The result was both tasty and inedible. The edible groats were delicious, but the ones with hulls could not be chewed by humans. We ended up making the salad with pearl barley, and it was very good–chewy kernels with a nice lemony tang and plenty of asparagus. The prosciutto could have been lightly cooked first to give it a more compatible, snappy texture.

I sent an email to Anson Mills. Isn’t it great when a mill has tech support? I heard back almost immediately. They accused me of using the grits recipe to make farro. I categorically denied this accusation. We exchanged a couple more emails. Then I realized, hey, why am I trying to describe this problem when I could just take a picture? It was the mill tech support equivalent of VNC. 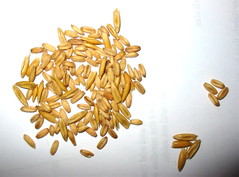 The grains in the lower right are the hully, livestock-oriented ones.

That solved the case. The tech support guy wrote:

Perfect, these are hulled parched french oats that we have been working on for a new product, not Farro, so now I understand and we do apologize again. Thanks for your patience and thank you for the image, we are studying it to determine how oats appeared in a Farro bag. We’ll send “real” Farro, tomorrow.

(Incidentally, if you’re wondering how to pronounce “farro,” it rhymes with “tomorrow.”) He also included instructions for hulling the parched French oats, but I had already thrown them out, and it sounded like a lot of work.

I’m sure Anson Mills is a little embarrassed about sending me the wrong grain, but not as embarrassed as I am for not being able to tell the difference between wheat and oats.

The real farro arrived last week. It does not have hulls. Other than that, it looks an awful lot like oats. I would not have been able to tell them apart in a grain lineup. I served some tonight with leftover beef stew.

In a word, it’s chewy, but not unpleasantly so. If you like wheat berries or French green lentils, you’ll like farro. I also recommend it for fans of hulled parched French oats.