Today is St. George’s Day, an important English holiday that I learned about yesterday on Becks & Posh. If you don’t know who St. George is, this web site informs you that:

I’ve never fought a dragon, but I have been to England, so I guess that’s why I was passed over for sainthood. Hmm, I’ve never been to Belgium. I could totally be patron saint of Belgium. Or of fries.

Er, anyway, to celebrate St. George’s day, we slew some rhubarb (meaning Iris and I bought some at Frank’s Produce, at Pike Place Market) and made Nigella Lawson’s rhubarb crumble. Actually, we made it yesterday.

If rhubarb crumble isn’t the national dish of England, it should be.

Aside from the fact that rhubarb crumble is delicious and appropriate to the holiday, I wanted to do a little science experiment. Last time I made rhubarb crumble, I thickened it with cornstarch. It was good, but had a distinct chalky cornstarch texture. So this time I made two batches, one with cornstarch and one with arrowroot starch. I got the arrowroot at Uwajimaya. Iris was also along for that shopping trip, and when we got to the starch aisle she said in a booming voice, “Dada, GRAB. THAT. STARCH.”

I grabbed that starch and noticed a couple of things about arrowroot, or at least this particular batch. First, it comes in hard little chunks rather that smooth powder like cornstarch. Second, when you mix it into a slurry, it has a weird smell. I was afraid the smell would permeate the crumble.

No worries! The arrowroot crumble won hands-down: it was less runny but had almost no artificial starch texture, and no weird smell, either. Iris cleaned her plate. If she keeps this up, she will be patron saint of rhubarb farmers.

Here’s one of the crumbles coming out of the oven, still bubbling: 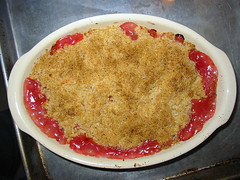 We attacked it, St. George-style, and soon it looked like this: 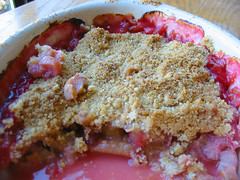 Here it is, plated up with whipped cream, since we had no double cream: 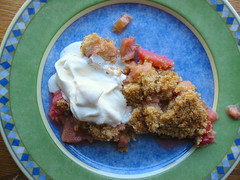 And here’s the recipe:

This recipe is halved from the one in the book; feel free to redouble it.